The Gangster, The Cop, The Devil
Watch Movie 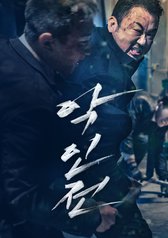 The Gangster, The Cop, The Devil

Detective Jung Tae-suk, investigating several murder cases, is confident that a serial killer is on the loose, though his colleagues don't believe him. Jang Dong-soo, a gangster who is on the way of his home, gets attacked by a stranger while getting out and checking his car after a minor bump. Barely surviving with a big wound, Jang receives a visit from Jung, who wants him to cooperate with his investigation. But he turns down the offer, saying he will catch the culprit himself for his revenge. But circumstances turn badly: Jang tries to get off threats from the rivals, while Jung tries to get ahold of the case that can get him a promotion. So, the two guys decide to start a joint investigation to catch the killer named K.