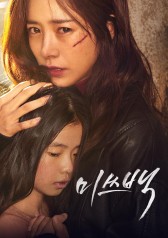 Sang-a, or Miss Baek, was convicted of a crime because she tried to defend herself. Now she doesn't believe in people, let alone love them. She is about to move to Jeju, and her "friend" Jang-seob, who was the detective for Sang-a's case, cannot hold her down. One day, Sang-a meets a small girl from her neighborhood. Her body gets covered with bruises; she just wears a pajama in the bone-chilling winter night. The girl, Ji-eun, has been abused by his father, Il-gon, and his girlfriend, Mi-kyung, for a long time. As an abused and neglected child herself, Sang-a tries and fails to "save" her. When Ji-eun escapes her house after getting beaten so badly, Sang-a grabs her and runs away. Il-gon and Mi-kyung reported the abduction while finding Ji-eun to get rid of the evidence. To protect the girl, Sang-a steps up and fight against the abuser.