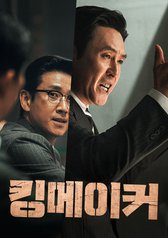 In 1961, Kim Woon-bum, a politician who lost four times at the general election, got a visit from Seo Chang-dae, a political strategist impressed by Kim's speech and ideology. After Seo joined the camp, Kim won election after election. But Seo's aggressive strategy got criticized inside the camp and out, and he got the nickname "the shadow of Kim." Thanks to Seo's beyond-imagination plan, Kim won again at Mokpo, his hometown where the ruling party tried everything - even illegal one - to defeat him. Now the goal is the presidential election. Once again, Seo shakes the minds of Kim's rivals to get Kim elected as the presidential candidate. However, right before the official presidential campaign began, an accident caused a rift between the firm partnership of Kim and Seo.