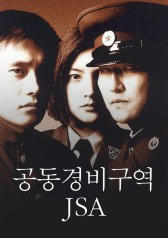 Multiple gunshots were heard at the North Korean checkpoint in the DMZ. Two soldiers were dead and one wounded. South Korean Sergeant Lee, a prime suspect of this case, was captured at the border injured. The truth becomes the mystery as the two Korean governments blame each other. Neutral Nations Supervisory Commission dispatches Sophie E. Jean, a Korean-swiss Army Major, to conduct a special investigation. She interrogates North Korean Sergeant Oh, the injured soldier, and Sergeant Lee, but they dodge the question with repetitive answers. After an autopsy on a dead soldier, a bullet was unaccounted for, which leads to another witness, S. Korea Private First Class Nam. But Nam, who can't stand the interrogation, tries to kill himself and goes into a coma. The news shakes Lee, and Jean tries to persuade him to find out what really happened that day.