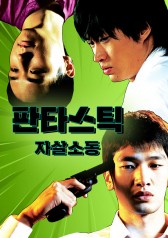 A collection of three short comedies about suicide attempts. THREE PEOPLE IN THE DARK: Ji-na tried to kill herself, but she survived without a scratch. When three of her acquaintances decides to take their life away, Ji-na is trying her best to keep them from attempting suicide. FLY, CHICKEN, FLY!: A young policeman wants to kill himself because he feels helpless. Heading to a deserted motel, he passes closely to a beautiful lady. The next day, he sees two guys holding the lady's clothes and decides to shoot them and himself with the three bullets that he has. HAPPY BIRTHDAY: Lim Choon-bong, a romantic old gay man, mourn that there is no one remembering him. When he is about to take his own life, he meets a cute young man named Phillip, who was chased by some bad guys. So, Lim switches his clothes with Philips and lures the baddies to a port.