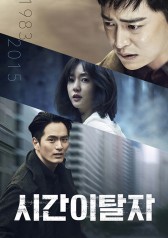 January 1st. 1983. A high school teacher Baek Ji-hwan gets stabbed by a robber while proposing to his girlfriend, Yoon-jung, and loses his consciousness. And on the same day 33 years later, a robbery-homicide division detective Kim Gun-woo gets shot by a robber he was chasing and falls into a coma. Both Ji-hwan and Gun-woo regain their consciousness, and two men begin to see each other in their dreams. After the initial shock, they come to accept that they're each living in a different time. In the meantime, Gun-woo falls in love with a woman named So-eun whose uncanny resemblance to Yoon-jung, Ji-hwan's fiancé, makes him feel close to both Ji-hwan and Yoon-jung. One day, while looking through unsolved crimes in 1980s, Gun-woo learns that Yoon-jung was murdered 30 years ago. In order to save the woman they love, Ji-hwan and Gun-wo begin their fierce battle against time, and their investigation leads to a surprising truth that neither man foresaw.