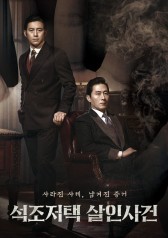 The Tooth and the Nail

In Seoul, a soon after acquiring independence from Japanese occupation, two men met and there came the sound of six shots firing. The police arrests Nam Do-jin, the wealthiest man as a suspect for the murder of a driver named Choi Seung-man. However, all they could find was a burnt body, blood spots, and chopped off fingers. As the trial goes on, it becomes more obvious that the murder had been meticulously planned out and carried out.