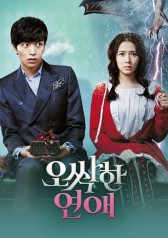 Jo-gu, a street magician, meets a miserable girl, Yu-ri, during one of his performances, and she winds up the inspiration for his “Horror magic show.” The show becomes wildly popular and Jo-gu is now a successful magician with a model girlfriend. Yu-ri begins working as an extra on the show but the darkness inside her, something her teammates sense, keeps her from truly connecting with anyone else. Jo-gu’s attempt to include her during dinner turns into a disaster when she gets blindingly drunk. Jo-gu calls Yu-ri the next morning, but when the phone disconnects with a weird noise, he starts to worry. When Jo-gu finds her, she confesses the long story behind her gray, wan face. Since surviving a high school car accident Yu-ri has been seeing the ghosts of dead schoolmates and her one-time best friend Joo-hee. Joo-hee is a ghost, following her everywhere and scaring the people around her, leaving her totally isolated. Even Yu-ri’s family eventually fled, leaving her behind to live alone in a tent, speaking only to a friend on the phone sometimes. During the course of Jo-gu’s failed attempts to find the lonely Yu-ri a boyfriend she resigns herself to the idea of her solitary life is best in the grand scheme of things. And though Jo-gu is sometimes scared witless himself, the pair starts to develop feeling for each other. Now consumed with jealousy, Joo-hee becomes a threat during the show and prompts Yu-ri to head off to join her family to save Jo-gu. Is getting away going to be that easy, or does Joo-hee have more tricks up her sleeve?