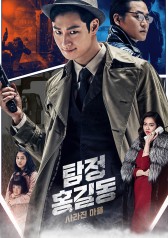 Though he runs an illegal detective agency, Hong Gil-dong’s reputation as a detective outshines that of so-called legitimate detectives. He’s brilliant, observant, and quick-witted. The only thing that casts a shadow over his otherwise successful career is that he hasn’t caught one person he wants to catch the most, Kim Byung-deok, the criminal who brutally murdered Gil-dong's mother. After twenty years of pursuing his mortal enemy, he finally discovers whereabouts of Kim Byung-deok. However, Kim Byung-deok has been kidnapped by someone, and what await Hong Gil-dong at Kim Byund-deok’s place are Kim Byung-deok’s two granddaughters, Dong-yi and Mal-soon. Having no choice but to take along the little girls who ask him to find their grandfather, Gil-dong continues with his search of Kim Byung-deok. However, he soon realizes that he has gotten himself entangled in a net of a much bigger conspiracy ensnarled by a powerful criminal organization called Kwangwoonhwe.