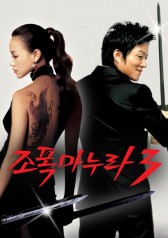 My Wife is a Gangster 3

Two of the most prominent Mafia groups in Hong Kong are at war after Chairman Cho from Black Dragon gets killed, and Aryong, daughter of Chairman Lim of White Lotus, is wrongfully accused. Lim sends her to South Korea and asks Dong-bang, their ally, to take care of the daughter. The Big Boss put Ki-chul, his trusted associate, in charge of her protection. Since the first meeting, however, Ki-chul and Aryong start a quarrel. Things are getting worse, as an assassin comes to Korea to murder Aryong.