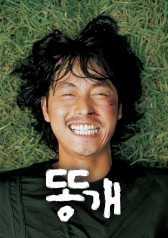 Chul-min lived with his father, Ik-geun, who worked as a detective. He met a stray dog at the police station and befriended with him. When he entered high school, he joins the soccer club and brings the dog every day. When Jin-mook and seniors tricked Chul-min killed the dog for meat, he threw a fist at them and got expelled. Nowadays, he still is a loner and loser, living with his father, a squad leader. He makes friends with MJK, a.k.a. Miryang Junior Club, and quarrels with Jin-mook. He also has a crush on Jung-ae, an ex-pickpocketer who lives with him after releasing from the correction facility. One day, Ik-geun raids an illegal gambling house and finds out a few people borrow the gambling money from local businessman Oh Deok-man, on their lands. Since the father of Chul-min's friend is one of the victims, he asks his fathers to quickly handle the matter. When Ik-geun returns no answer, Chul-min decides to solve the problem by himself, with help from the friends.