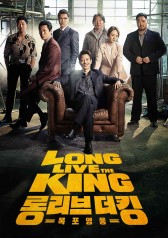 Jang Se-chul is a gangster who dominates the streets of Mokpo. One day he meets So-hyun, a young lawyer who crashes into him over the mall construction, and has a crush on her. So-hyun refuses him and says him to do the right thing. Jang decides to close all the shady business and asks Hwang-bo Yoon, a well-known politician from Mokpo, to be his mentor. Hwang-bo tells him to forget his past and start all over. On the way to work, the bus Jang gets on hits the bridge railing. He saves the unconscious driver and becomes a hero. Choi, the incumbent Assemblymen, orders Cho Gwang-chun, Jang's rival, to attack Hwang-bo, his opponent for the next election. Injured severely, Hwang-bo withdraws his candidacy and endorse Jang as a new candidate.