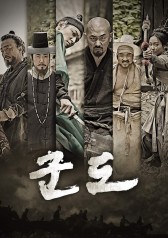 In the 1860s, people's lives are further devastated by natural disasters, famine, and the tyranny of greedy aristocrats. Dochi, a poor butcher, tries to kill a woman. Even though the kill was ordered by Cho Yoon, an illegitimate son of a wealthy aristocrat, he cannot take the life of a pregnant woman. Running away from the scene, Dochi gets captured by the outlaws. The leader, Kundo, recognizes Dochi and releases him. But when Dochi comes back to the town, Cho's subordinates assault him to the point of unconsciousness and burn his entire family to death. Having lost everyone he loves, Dochi wields his butcher's knife to Cho, only gets defeated by him. Kundo hears Dochi's story and recruits him into his family. After two years of rigorous training, Dochi is reborn as the outlaw. Finally, he might get a chance to get his family's revenge to Cho.