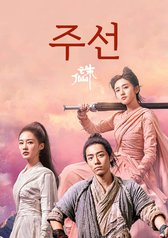 After witnessing the massacre of his family and villagers, Zhang Xiaofan became a disciple of the Qingyun Sect. He grows up as a vibrant and kind young man, but his power and skills are behind most of the disciples. One day, he receives a gift from his former teacher: a jade that brings him the mythical martial art. Soon, he becomes powerful enough to conquer the world, and those who desire the power and those who worry Xiaofan's misusing it try to stop him. However, Xiaofan finally realizes the true nature of his new power as he finds out who murdered his family and the entire neighborhood.