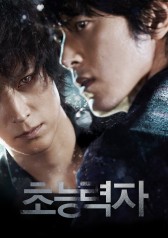 One day, a man with supernatural power comes into a small pawn shop Gyu-nam works and begins to control people’s mind to rob the place. The man is utterly surprised when he realizes that his supernatural power doesn’t work on Gyu-nam. Flustered, the man ends up killing a man by accident and his murder is recorded on the security camera. From then on, the man begins to hunt down Gyu-nam who holds critical evidence of his crime and Gyu-nam the man, for ruining his peaceful life. The unavoidable battle rages between an ordinary man and a man whose special power is rendered useless in the face of his only adversary.