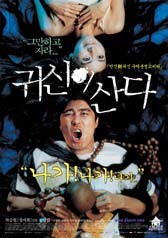 Pil-gi has finally saved enough money to make his late father's wish come true: He can buy his own house. However, upon moving in to his new residence, he is bothered by one of its previous residents, a poltergeist, who claims the house belongs to it and attempts to scare him out. Pil-gi calls the police, invites friends to stay for the night, and tries exorcism rituals, but none of it works. He eventually decides it would be best to sell the house, but discovers that he can see the ghost who has been haunting him.