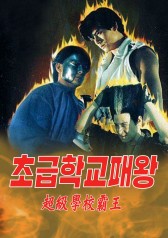 Based on the video game STREET FIGHTER 2, this action-comedy movie is set in two different times. In 2043 Hong Kong, The General, an evil crime lord, is sentenced to death by Judge Yu. Ken and Honda, The General's handymen, goes back to 1993 and attempts to kill young Yu before he became the judge. Hong Kong police also send the elite squad, Ryu, Guile, Vega, and Dhalsim to stop the enemies. The future cops arrive in 1993 and meet Tai-hung, a not-so-bright young boy who is being bullied by other students. The squad suggests the boy that they will help him to settle in school and be along with others if he can help them find the young Judge Yu.