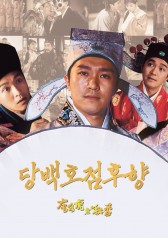 Tong Pak Fu is famous for his expertise as an artist, poet, and calligrapher. Prince Ning wants to be his patron, but Tong manages to refuse his offers several times. Tong has eight wives, but all of them don't appreciate his artistic skills. Lonely Tong sets a quest to find someone who can recognize his talent. One day, he meets Chow Heung and falls in love at first sight. He finds out that Chow Heung is a maid for the Wah family. He becomes a low-level servant to get closer to her, but she refuses his flirtation. Meanwhile, Tong solves some problems for the Wahs, and Madam Wah promotes his as a tutor for her two sons. While he gains the trust from the Wahs and gets closer to Chow Heung, Prince Ning, the political rival of the Wahs, tries to put the Wahs in a crisis.