Having trouble with the sound? Click the button on the right until you hear the sound.
Allow Flash
Detective K: Secret of Virtuous Widow
Watch Movie 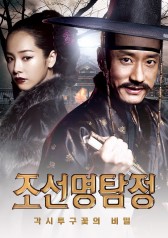 King Jungjo suspects corrupted officials of embezzling tax and orders an investigation to Detective K. K saves Seo-pil, a dog merchant framed for the murder of a local government clerk. Finding out the governer is responsible, K visits him, but he was already murdered. K gets arrested at the scene, but Seo-pil and the King save him. The King orders them to continue the investigation in secret. The two arrive at Jeoksung and find out the wolfsbane found at the crime scene is from a farm in here. The farm's owner, the late Mistress Kim, was a relative of Minster Lim, the most powerful man in the country. After they find out that the murder weapon is from China, K and Seo-pil meet Han, a merchant who dominates Chosun's trade business. As they dig deeper, the seemingly unrelated cases lead to a much bigger conspiracy.