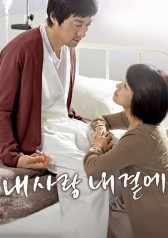 Jong-woo suffers from Lou Gehrig’s Disease that weakens muscles and eventually causes paralysis. On the day he lost his mother, he runs into Ji-soo, his childhood friend, who has become an undertaker. They fall in love and get married a year after. Jong-woo’s symptoms have gotten worse, and the newlyweds’ first home is the Jong-woo’s room in the hospital. Although it's hard for him to even hold a spoon, Jong-woo is happy with his loving wife Ji-soo and is determined to get well. Even in Jong-woo’s ward where most patients are in critical conditions, some patients get better or find hope with a successful surgery. However, Jong-woo’s symptoms get worse despite his strong will and optimism, and he eventually begins to experience difficulties in speaking, which he dreaded the most.