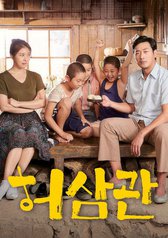 Chronicle of a Blood Merchant

In the 1960s, a man named Heo Sam-kwan barely makes ends meet. One day, he falls for Ok-ran, the daughter of the snack merchant and the village beauty. When he sells his blood, he gets encouraged by his friends to ask Ok-ran out, which he does. After having a nice meal and coffee, Sam-kwan asks her to marry him because he spends all his money on her. He then negotiates with Ok-ran's father, saying he will inherit the family name and business. Eleven years later, now as Ok-ran's husband and the father of three sons, Sam-kwan is still poor but very happy. But his peaceful life gets interrupted when the rumor starts spreading: his eldest, Il-rak, resembles Ha So-yong, Ok-ran's then-boyfriend.