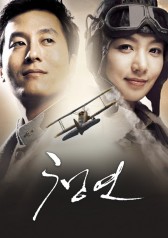 Kyung-won always dreamed of flying to the sky. When she saw the airplane for the first time, being a pilot became her life goal. She attends the Air Academy while working as a cap driver. Ji-hyuk, a student from Chosun, falls for her, but he is forced to enlist by his father. A few years later, Kyung-won's popularity sails across the sea to her home country. She meets Ji-hyuk again and falls in love with him. When Kibe, who took Kyung-won's qualification for the flight competition, gets into a serious accident, Kyung-won saves her. With Ki-be's support, Kyung-won manages to enter the contest and narrowly wins the title. Her final goal is to fly back to Chosun, but the reality keeps her from flying to the sky.