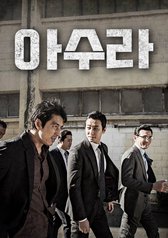 Asura: The City of Madness

In Annam, influential people try to get something from the recently announced redevelopment project. Among them, the greedy and corrupt Mayor Park does everything - even illegal one - to keep his power and wealth flourishing. Do-kyung, a homicide detective, works as a henchman for Park to pay his wife's surgery. Kim Cha-in, a prosecutor who has been gunning the Mayor, threatens Do-kyung to be his spy. Trapped between the Mayor and the prosecutor, Do-kyung sends his trustworthy Detective Moon as Mayor Park's bodyguard. But that doesn't lift Do-kyung's burden, and Sun-mo also becomes corrupt. Then, a case happens that can bring every party of interest in one place.