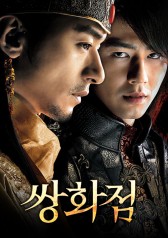 Towards the end, Goryeo is thrust in the political chaos and is under the Yuan Dynasty’s oppression, which becomes more severe as the king and the queen, the Yuan Dynasty’s princess, fail to produce an heir. The captain of the Royal Guard, Hong Rim, who is also the lover of the king, never lets his guard down against the relentless threats from assassins. As the pressure from the Yuan Dynasty and his own counselors increases, the king orders Hong Rim to sleep with the queen to produce a royal heir to his throne. However, Hong Rim and the queen, who at first reluctantly complied to the order, find themselves falling madly in love, and the king begins to suspect Hong Rim’s infidelity. Ensnared in the political turmoil and blind passion of their forbidden love, two men and the queen fall into the pit of violent desires and destruction.